The Accra Regional Police Command has announced a GHS20,000 bounty on information that will lead to the arrest of armed robbers perpetrating recent attacks in Accra.

This was contained in a statement signed by the Acting Director-General of Police, Public Relations, Assistant Commissioner, Kwesi Ofori.

He charged residents to bear with police personnel with regard to the scaled-up security measures to deal with the threat.

ASP Kwesi Ofori urged the public and corporate institutions who intend to withdraw and deposit huge sums of money, to exercise caution or contact the law enforcement body for assistance as far as such transactions are concerned. 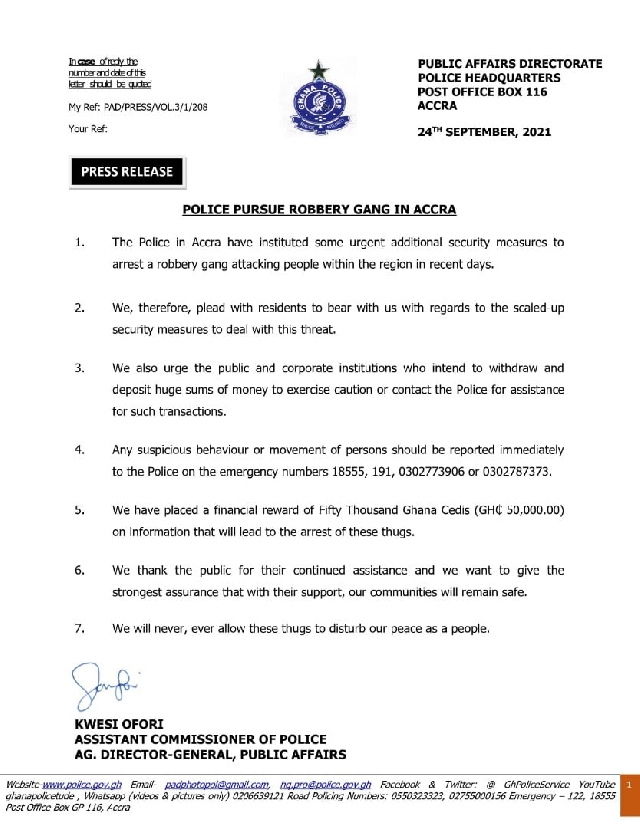 A woman was robbed of some GHS29,000 just after she had cashed the amount from a bank at Apenkwa, Achimota, Accra on Monday, 20 September 2021.

The daylight robbery by two men on a motorbike resulted in the shooting of the 33-year-old victim.

She is currently receiving treatment at the hospital.

Motorbike riders will be arrested after 6:30pm – Police Commander

Sunyani Suicide: We will fully cooperate with the police – Miracle Preparatory School